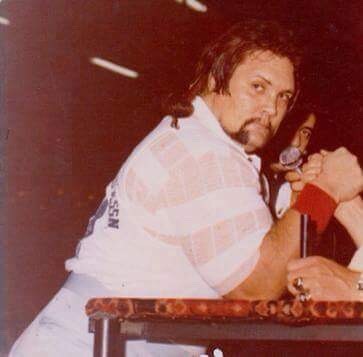 Initially competing in 1968, Dann won 3 Great Lakes, 2 North American and 2 East Coast Championships in arm wrestling. After a 72ft fall from a work accident, suffering a back broken in 3 places and a partial lung removal which halted his arm wrestling career, Dann rehabilitated and resumed competing in the mid 70’s.

Founder and President of the Lower Eastside Sports Center from 1979-1995, the Fighting Eagles boxing team went 35-0 against the top teams from the Great Lakes area, led by Mighty Mike Maggio, a 4 time state Golden Gloves champion who competed on the US Olympic Team, winning the Outstanding Fighting Award in the US vs. Sweden contest.

Dann created the Hard Hat Olympics in Erie from 1970-1985, which was a precursor to the American Gladiators. He created and produced the first American Gladiator competition before over 3,000 fans at Erie Tech Memorial in 1982, with Lower Eastside Vice President Donny Plonski chosen to be the first American Gladiator combatant. Dann was publically recognized by the stars of the Gladiator Television Show during their appearance before a sold out Erie Civic Center audience in April 1992 on their 100 City Tour. Tim Feldman, a Lower Eastside fighter, beat out 300 competitors to represent Erie in the Atlantic City National Finals. Dann became the promotions director and conducted the talent search/tryouts for the cast and contenders of the American Gladiators Live Show in Orlando from 1995-1998.

Carr, Danny Moyak – the first Fighting Eagle, and PA Tough Man Champion – along with over 80 Lower Eastside supporters will be highlighted in a movie titled “Tough Guys” which documents the origins of the MMA Fighting Style during a 3 day event held in Pittsburgh, PA in 1980.

Dann has been the head trainer / strength and conditioning coach for the last 10 years at Team 3D Academy of Professional Wrestling preparing students from around the world to be future WWE Superstars.

In all the years spent directing the Lower Eastside Gym he took many kids off the street teaching them self discipline through boxing, weight lifting, body building, arm wrestling, and general conditioning. Many of them have credited Dann’s influence and guidance for life changes and finding an alternative path to life on the streets.

His World, Regional, and State titles in arm wrestling were certainly commendable achievements. But, his determination and efforts to develop a free place with a supportive environment for our troubled youth to express themselves positively through physical activities, are his biggest community accomplishment.