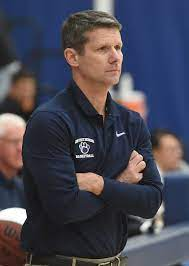 Dave completed his 27th season as the head coach of the men’s basketball team at Penn State Behrend in 2021-22. He has produced 27 straight winning seasons to rank 20th among NCAA Division III winningest programs in the decade. The Lions have earned an NCAA or ECAC postseason bid in 25 of the last 26 years. He is the all-time leader in wins with 534. The Lions have advanced to the NCAA Div. III Tournament eight times and have made 15 appearances in the ECAC South Region Tournament, winning the title in 1998-99 and 2009-10. Dave has been named the AMCC Coach of the Year a league-record seven times, with his teams winning eight AMCC regular season league titles and six conference tournament championships. His teams have won 20-or-more games 17 times, including a 24-5 finish in 2007-08, as the Lions won the AMCC regular season and tournament titles and reached the second round of the NCAA Tournament. His 1999-00 squad posted the most wins in school history with 26 wins while advancing to the NCAA Elite Eight in the first-ever NCAA Tournament appearance. As a student-athlete Dave was a standout at LeMoyne.